You could say my introduction to Victor Hugo was, well, unorthodox. Or low-brow. Or just bad.

I first heard the name on a children’s cartoon show I used to watch after school called Victor and Hugo, Bunglers in Crime, which recounted the antics of a tall, demure thief named Victor and his squat, awkward partner-in-crime Hugo, who went about causing low levels of mischief. Hugo was always miffed that his name came second in the crime-team-title and the two would continually argue about why Victor had to come first, without explaining why. I pretended to be amused by the recurring joke but really didn’t get it at all. I also thought that Disney invented Quasimodo and Esmeralda and that Les Misérables was originally written for the stage. 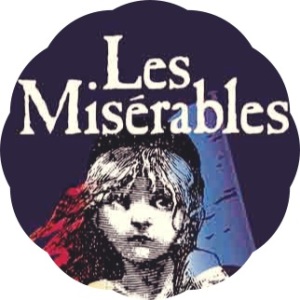 Now I am older and wiser, and know that Victor Hugo was a real person, and a rather fab one at that. He is renowned in France for his beautiful poetry and worldwide for his novels Notre Dame de Paris (The Hunchback of Notre Dame) and the immensely influential Les Misérables, which took him over 17 years to complete. He was a member of the Académie Française as well several political committees and spent much of his working life in exile. In the meantime, he managed to pen thirteen plays, nine novels and over twenty collections of poetry, as well as some essays and biographies. He is widely considered to be the greatest French Romantic writer.

My personal experience with Hugo’s work is admittedly quite limited. In fact it really doesn’t extend beyond Notre Dame, Les Mis and the presentation I had to give last year on one of his less wonderful plays, Hernani, which is basically Romeo and Juliet, but less in a West Side Story kind of way and more in an all-out-plagiarism kind of way. But his Demain, dès l’aube, has been my favourite poem forever. So I was excited to see the museum devoted to him.

La Maison de Victor Hugo is located in the majestic Place des Vosges, which was originally conceived as a royal residence by Henri IV (the area is incredibly culturally rich- a list of the many nearby museums is here). Hugo rented the second floor of the square’s Hôtel de Rohan-Guémené from 1832-1848, and while much of the furniture and some of the layout has since been altered, the apartments should still give you an idea of what kind of space Hugo inhabited when he wrote much of Les Mis.

The atmosphere is surprisingly spacious –and luxurious- for a writer’s quarters, with beautifully upholstered wall panels, louvre windows and a view to die for. The usual spiel about a nineteenth-century Paris-based writer is one of impoverishment (think Oscar Wilde and the infamous “either this wallpaper goes or I do” quote). Yet everything here is red velvet and mahogany. The lower levels of the museum include a few drawings (he was also a political cartoonist), plenty of information on his life and occasional temporary exhibitions, but the second floor was my favourite section, if only for how decadent it all was.

When I visited, there was also a small school group on a tour. I felt a bit of a cringe to see them gawking at Hugo’s living room, cross-legged on the floor, just as I gawked at Victor and Hugo gallivanting about on TV when I was their age. Their introduction to Hugo was certainly a more sophisticated one than mine. But having been an at-home tutor in Paris (fancy code for “glorified English-speaking babysitter”), I knew those kids were going home to watch the twenty-first century French equivalent of Victor and Hugo, Bunglers in Crime afterwards. What mattered wasn’t how we came to know about Hugo. What mattered was we were all there to learn about one of France’s most important writers. And to envy his snazzy pad.

Opening hours: Tuesday to Sunday 10am to 6pm, closed Mondays and public holidays

P.S. If you’re a Hugo fanatic, you can also see his tomb (as well as Emile Zola’s, Marie Curie’s and dozens of others) in the grandiose Panthéon, in the heart of the Latin Quarter.