Isn’t it strange how you can go through the world completely unaware of the existence of something, then discover it, and suddenly see it everywhere you go?  Until recently, I lived in a blissful world in which sinkholes were a nameless horror that existed only in my nightmares. Then I was told they were real. All of a sudden, every other natural disaster story or ‘freak accident’ news piece seemed to revolve around the earth spontaneously opening up and swallowing someone. 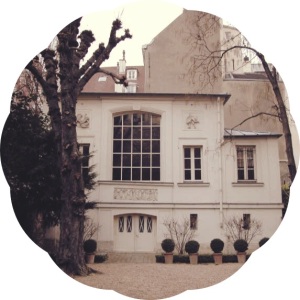 That’s a rather morbid example, but it’s also happened to me with Carl Jung, phenomenology, pound cake, Super 8 film and Irene Dunn. It happens to all of us from time to time, with the most unexpected things. It’s an uncanny feeling, but a pleasurable one at the same time. Yet never was the feeling more pleasurable than when it happened to me with Delacroix. 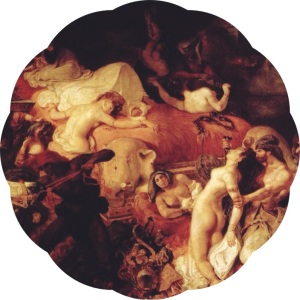 La Mort de Sardanapale (The Death of Sardanapalus), 1827How I went nearly twenty years without knowing who Eugène Delacroix was is now incomprehensible to me. Once I came across his stunningly decadent La Mort de Sardanapale (The Death of Sardanapalus) in an art history book, the Romantic painter seemed to be on everybody’s lips. He cropped up in lectures on French Colonial Africa and Orientalism, his La Liberté guidant le peuple (Liberty Leading the People) was mentioned in any study on the Revolution, his majestic art peppered the Grand Hall of the Louvre, his tomb was one of the few I recognised on my very first visit to the Père Lachaise cemetery (these days, I’m an expert). Throughout my first big trip to Paris several years ago, Eugène Delacroix seemed to be waiting for me in some way, shape or form around every corner. The feeling’s faded, but the thought of him still makes me nostalgic for that time. 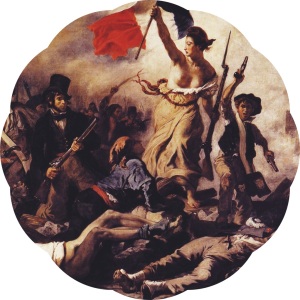 La Liberté guidant le peuple (Liberty Leading the People) , 1830So imagine my delight when, upon my return to Paris last year, I came across Le Musée Delacroix. Like La Maison de Balzac and La Maison de Victor Hugo, the museum is housed in the artist’s original living quarters. There are some beautiful rooms filled with animal studies, portraits and intricate etchings (Delacroix was an accomplished lithographer, renowned for his illustrations of Goethe, Shakespeare and Scott’s novels). Yet the house is not the most beautiful part of the museum. Above the quiet courtyard, across a narrow walkway, lies Delacroix’s studio. Here the larger and more impressive of the museum’s paintings are displayed, in a tranquil, airy space. Considering Delacroix worked in that very spot, the sanctuary of the studio is the perfect setting for his monumental paintings.

It’s no fun to feel plagued by the terror of sinkholes. But I’d happily relive the time when Delacroix was a regular part of my day. At least I know where to go now, should I need a Delacroix fix.

P.s. Like so many of the museums in this blog, Le Musée Delacroix is in a gorgeous location. The museum is situated in a beautifully calm square in Saint-Germain-des-Prés; I recommend a wander along the nearby rue de Buci for coffee and nonchalant people-watching afterwards.

Opening hours: Wednesday to Monday 9.30am to 5pm, closed Tuesdays

Note: Tickets to the Louvre’s permanent collections (full rate 11 euros) are also valid for the museum on the same day.