If there’s one place in Paris I truly hate, it’s the Gare Montparnasse. With four metro lines, regional trains and grandes lignes that run as far south as Spain, inside the station is bedlam. Outside, the Tour Montparnasse looms over all, the only huge skyscraper in the city bounds- and conspicuously so. I am still recovering from the experience of trying to navigate a rental car out of a concrete labyrinth underneath the station in 2013. And on top of the above-ground station itself is a mountain of office buildings.

To be short: Montparnasse-Bienvenüe is the worst. 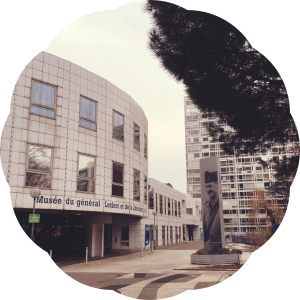 However, I’m a die-hard history buff and frequently teach my students about the social, cultural and ideological turmoil of 1930s and 40s France. So when I heard there was a Paris museum about the Resistance, the famed Resistant Jean Moulin and the 1944 Liberation of Paris, I was excited to go. Then I learned it was located at the very top of the buildings on the very top of the train station (which itself is on top of the metro), and my excitement dissipated. Still, la Muséophile is a professional, so off I went.

The Musée de la Libération de Paris is in a strange setting. A really strange setting. You would never know that train lines were lying, layer upon layer, below it. Or that you were in Montparnasse, or even Paris. The museum is reached through a series of staircases, lifts and corridors leading forever upwards. When you reach the top, you come out on a bizarre rooftop area with a courtyard, multiple tennis courts, a crèche and even more office buildings. 19th-century Haussmannien residences poke their very top levels up among the bottoms of the office complexes, in an architectural mosaic you wouldn’t expect to see anywhere.

And on top of it all is the museum, whose full name is, rather incomprehensibly, Le Musée du Général Leclerc de Hauteclocque et de la Libération de Paris- Musée Jean Moulin.

But its location aside, it is a great little museum. On display are 1940s newspapers, propaganda posters, newsreel footage and clothing from the period, detailing the Occupation, Collaboration, Resistance and Liberation. Uniforms, medals, articles, letters and radio recordings bring it all to life. There are also frequent temporary exhibitions which reveal a lesser-known aspect, figure, or event that marked that fateful period of Paris history.

Montparnasse-Bienvenüe is still the worst. But the Musée de la Libération makes it just that little bit better.

Tuesday to Sunday: 10am to 6pm