Having visited every other museum in the Marais, from the historical (Le Musée d’art et d’histoire du Judaïsme, le Musée Carnavalet, le Memorial de la Shoah) to the artistic (le Musée Picasso, le Musée Cognacq-Jay, la Maison européenne de la photographie) and the scientific (le Musée des arts et métiers, le Musée de la chasse et de la nature), I recently ventured into the basement of 11 rue Saint-Paul, to the Musée des automates et de la magie. I’m not sure what I was expecting, but I was delighted by what I found. 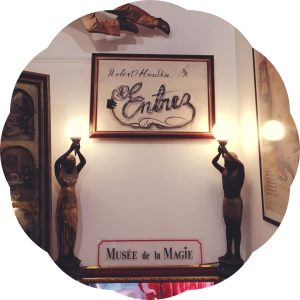 The magic and automatons museums (housed together, though you can choose to visit one or both at the same time) can be found down a steep flight of stairs, under the rounded stone ceilings of a traditional French cave, or cellar. It’s home to a collection of fantastical curiosities and carnavalesque objects. Over a hundred quirky, creepy and creative automates from the 18th century onwards, often powered by a hand crank or other analog mechanism, twirl, trill and pop out at the visitor. There are dioramas of all kinds, from dancing figures powered by complex cogs, to a camera obscura-style trompe l’oeil, in which you look through a lens at what appears to be a woman’s backside before it’s cheekily (pun intended) revealed to be a model of a peach. 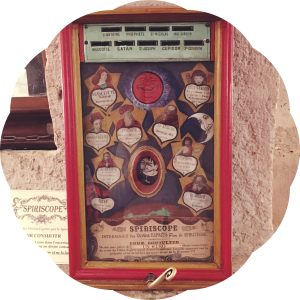 In the magie area of the museum, traditional carnival tricks, such as the boxes used to “saw” performers in half, stand next to the chains and mirrors used by classic magicians like Robert Houdin, after whom the famed daredevil Houdini styled himself. The Musée des automates et de la magie houses a few sneaky exhibits for grownups, such as the peach-bum, but for the most part the museum is aimed at wide-eyed younger visitors. Yet even adults will be delighted by the charming touches, like the old-fashioned magic show that takes place in the main cave several times a day. This tiny little underground museum, with its whirring robots, uncanny contraptions and disappearing magicians, makes me wonder what else the ancient cellars of the Marais may be hiding. 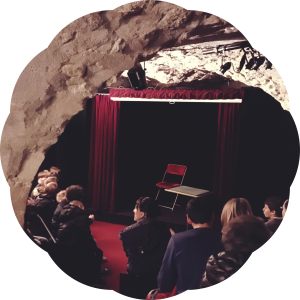