These days, I like to think I’ve integrated pretty well into Parisian culture. I don’t get mistaken for a tourist too often, I know the local vernacular and I can even navigate the metro without grief. (Sometimes I even know which carriage to get on to line up with the right exit at my stop!) But nothing jolts me back into Aussie mode more than the French cultural acceptance of smoking.

When I taught English at Paris 3, I would dismay at the number of my students, many of whom were still in their late teens, who would duck out of the building during the break to smoke. I know it isn’t very cool, and adults can do what they want as long as they’re not hurting anyone else, but my students came to expect my half-joking implorations and puppy-dog eyes as they took out their lighters. I still remember the bashful strains of “Désolé, Madame…” as they headed outside.

Ironically located around the corner from the Cimetière du Père-Lachaise, le Musée du Fumeur is one of the few museums in the north-east of the city. A tiny little site, it is nestled in amongst the flower shops and gravestone makers. But the black humour of its setting aside, the museum hosts an unusual and comprehensive collection on the history of smoking. There are ceremonial pipes from Asia, the Middle East and Native American communities. There are North African sheeshas, Chinese opium pipes and 17th-century French snuffboxes. There are portraits, paintings and advertisements of smokers of all kinds from around the world. 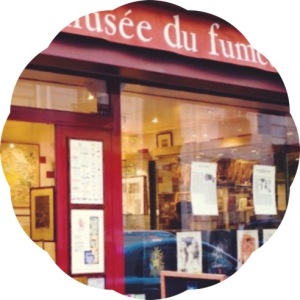 For better or worse, smoking is an entrenched cultural ritual, in France as in many other places. The Musée du Fumeur is adept at conveying how the practice is an important part of history. That has cultural value. Even if I’m not going to stop with the puppy-dog eyes.