It doesn’t run quite through the centre of Paris, but the Seine river is both the heart of the city and the thing that splits it in two. You’ll hear Parisians refer to their location in a number of ways – arrondissement, closest metro station – but the main geographical distinction in Paris is between river banks. Even though the Seine runs roughly west to east in a horseshoe shape across the city, you either live on the rive gauche (Left Bank) or the rive droite (Right Bank). The distinction is starker to locals than it is to visitors. On both the rive gauche and the rive droite you can find spots that are fancy and run-down, quiet and bustling, residential and commercial. Both are filled with museum treasures. But to simplify, the rive droite is the cooler, more hyperactive younger sister to the rive gauche’s polished, composed Parisienne.

I’ve seen the same look of displeasure and pity on the face of an Oberkampf hipster and a chic lady from La Muette, when I told each of them I lived on the opposite bank. I’m probably not a very good Parisian because I don’t have any particular loyalty to one bank or another, and have lived on both. But most Parisians will profess a preference, and sometimes a strong one. (And if you’re wondering, the little islands in the city centre, the Ile de la Cité and the Ile Saint-Louis, are part of the fourth arrondissement and so are technically rive droite.)

But there’s one area of Paris that escapes this binary categorisation: the stretches of stone, wood and steel that connect one bank to another. The ponts de Paris, or bridges of Paris, are not divided by the Seine because they transcend it. And some of them are truly wonderful. 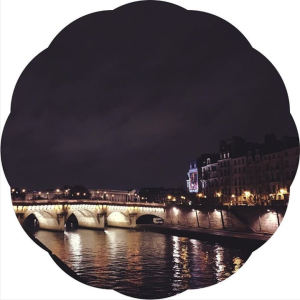 There are 37 bridges that span the Seine inside Paris limits. Many are unremarkable (though almost all are a good spot from which to snap a photo of the cityscape) but some are beautiful and historic. When it comes to iconic Paris bridges, many first think of the Pont Neuf, its elegant stone arches stretching from the sixth arrondissement to the first. A little confusingly, its name means the “New Bridge” but it was begun in the 1570s and is the oldest remaining bridge in the city. The name makes more sense when you learn it was chosen to distinguish the new, open structure of the Pont Neuf from the claustrophobic neighbouring bridges, lined with cramped houses, that were popular at the time. When crossing the Pont Neuf, make sure to pop into the tranquil Place Dauphine, a secluded square connected to the bridge’s centre. 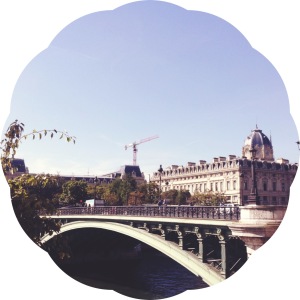 A few hundred metres to the west, the Pont des Arts is a more modern, early nineteenth-century bridge that links the Ecole des Beaux-Arts to the left and the Louvre to the right; hence the name. With simpler arches, it was the first metal bridge to be constructed in the city, but its walkway is made of simple wooden slats. The Pont des Arts is most famous these days for its ‘love locks’ saga; the encrustation of padlocks left by tourist couples who would inscribe their names on a lock and clip it to the bars, throwing the key into the river. The sentiment is romantic but the practice was dangerous and a headache for the City of Paris. The locks were famously removed in 2015 (turns out almost a million pieces of steel compromise the integrity of a lightweight bridge!) but the odd stray lock still finds its way onto the barricades. However, I’ll always remember the Pont des Arts for the Friday-night picnics of cheese and wine we would have with the rest of boho student Paris on the pedestrian-only bridge. 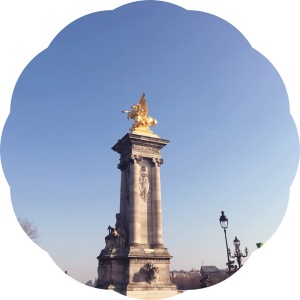 But the most stunning of all ponts de Paris would have to be the Pont Alexandre III. This bridge connects two of the city’s most luxe districts, the regal eighth on the ‘right’ (read: north) and the picturesque seventh on the ‘left’ (i.e. south). The view from the Pont Alexandre III is beyond compare, spanning from the gold-domed Invalides to the art nouveau Grand Palais to the Tour Eiffel itself. The bridge, begun in 1896 for the 1900 World’s Fair, is all soaring angles, art nouveau streetlamps, and monumental creatures wrought in stone, iron and literal gold. It’s both busy and open, vibrant and elegant, breathtaking and the perfect place to catch your breath. In other words, it’s all the good parts of the two Paris river banks that it links together.